The following quote is taken from the website of the Italian Ministry of Health, applying an International concept:

“The expression ONE HEALTH refers to the concept that human health is linked inextricably to the health of animals and the environment; an approach that is rapidly becoming both essential and strategic…”


The One Health concept coincides with what has been FATRO’s mission for over 25 years: “Animal Health your Health”.
FATRO’s objective, which is driven both by ethical and farsighted considerations, is to guarantee the well-being and health of animals. In keeping with our company philosophy and the values that have always formed an integral part of FATRO, we neither manufacture nor sell medicines for animal euthanasia. Similarly, FATRO does not market any veterinary products that could be administered to human beings for illicit or hazardous purposes, such as anabolic steroids, hallucinogens or narcotics.
But being healthy means more than just being fit! For this reason, we have expanded the concept of health to include the well-being of both animals and human beings, and this, naturally, extends also to the environment, to which both are linked inextricably.

Back in the early 90s we introduced the Dalmazin® aluminium box, a fully recyclable packaging solution having a significantly reduced environmental impact with respect to the plastic multi-pack cartons in use at the time. Since then we have remained committed to introducing innovations designed to benefit health, well-being and the environment.
For this reason, and out of a desire for constant improvement, we have decided to create a logo that sums up everything that we at FATRO hold dear. A single image that symbolises our commitment and values, both within the company and with respect to the market, while simultaneously inspiring our young people to uphold our mission and to make their own contribution to achieving these objectives.
The ONE HEALTH ECO HEALTH logo appears on all the material that comes into contact with the public (packaging, brochures, advertisements, internet websites, gadgets etc.), representing a synthesis of all our efforts on behalf of health, well-being and the environment.
To ensure that FATRO is fully appreciated for all the activities it carries out, including those that are less well-known and/or not directly visible, we have decided to tell the story through a series of interconnected chapters, both for those who have been involved in this virtuous process from the outset and those who, by a happy accident of birth, have not witnessed it first-hand..

Animal health is closely linked to human health, both in terms of reciprocally transmissible diseases or zoonoses (West Nile fever, leishmaniasis, toxoplasmosis, Lyme disease etc.), and the methods used to treat them. A case in point is the use of antibiotics. While these medicines play an important role in treating both human and veterinary diseases, it is equally important to ensure that efforts to combat antibiotic resistance are coordinated between the two sectors. Thus, as soon as we begin to expand the concept of health, it is immediately apparent that animal and human well-being are one and the same thing.

The link between HFP animals and human health lies in the food products that are derived from them (meat, eggs, milk, honey, etc.) For this reason, it is necessary to adopt a therapeutic approach that, in addition to treating the animals, ensures such products no longer contain any traces of the drugs used to cure them when they reach our dining tables. It is important to bear in mind that “prevention is better than cure”, and this entails only using antibiotics “when and where necessary”, so as to avoid giving rise to phenomena of antibiotic resistance. While there is widespread awareness of these phenomena nowadays, this was not the case in the mid-80s when FATRO introduced its first veterinary probiotic, designed to prevent diseases through natural methods, thus reducing the use of antibiotics. Unfortunately, this preventive treatment approach was too far ahead of its time and failed to achieve the success it deserved. During the same period, the increasing focus on prevention resulted in the creation of the FATRO Biologicals Division, which enjoyed rapid growth and now produces and sells vaccines for all HFP species, both in Italy and a large number of other countries. FATRO launched the Fatroximin® line introducing a new concept in antibiotic therapy. Rifaximin, the active substance of this line, is an antibiotic that does not cross organic barriers and hence remains concentrated in the area where it is administered, without passing into circulation. This means that the food products derived from the treated animal are free from any trace of the drug, reducing the risk of antibiotic resistance and environmental contamination through excretion to a minimum. Over thirty years since its launch Fatroximin® may be considered an example par excellence of a “ONE HEALTH ECO HEALTH” product.

Remaining in the period between the late 80s and the early 90s, FATRO’s pioneering efforts to promote animal well-being saw the introduction of Dalmazin® (Dalmaprost®), based on the use of active isomers designed to obtain the maximum therapeutic effect while eliminating virtually all side effects and avoiding unnecessary suffering on the part of the treated animal. During the same period Simpanorm®, the first product capable of normalising the sympathetic system while protecting the animal from the negative effects of stress, was also launched.

FATRO’s commitment to the well-being of HFP animals and to safeguarding human and environmental health is a long-standing one and has grown with the passage of time, acquiring greater importance with each passing year, so that now, our careful and meticulous development processes result in a wide variety of products and associated services (diagnostics, protocols, specialised training etc.) that represent the maximum expression of respect for animals, human beings and the environment.

ONE HEALTH in domestic animals
(Pets and non-HFP animals)

ets are considered as part of the family, living in close contact with family members, sharing their emotions and being subject to the same lifestyle-related stresses and even pathologies, such as obesity, diabetes etc. Hence products like Killitam, for car-sickness, Continence®, for urinary incontinence in female dogs, to name just two products designed to treat conditions associated with domestic life and promote the well-being of both humans and animals.
Pets are particularly prone to insect-borne parasitic diseases, such as filariasis (Heartworm disease HWD) in response to which FATRO has developed Afilaria® SR, a treatment based on a complex, prolonged release technological solution that means animals can be treated on once-a-year basis.
FATRO’s solution for the treatment leishmaniasis consists of the product Antishmania®, which eliminates the parasite.

ONE HEALTH FATRO,
for human health and well-being

While FATRO’s products are intended exclusively for the veterinary sector, the company’s activities also affect human health and well-being both indirectly, as we have already seen, and directly through initiatives dedicated to both company and non-company personnel.

In addition to a maximum commitment to the prevention of professional accidents and illnesses, FATRO also cares for the well-being of its employees though attentive maintenance of working and recreation environments, and by providing its personnel with a range of benefits and opportunities, with particular onus on the younger generation and their cultural development. To this end, the company has opened a library that provides free access to both books and audio-visual material.
Furthermore, FATRO covers the cost of all middle and high school textbooks for all its employees’ children, as well as contributing to the higher education costs of the brightest students.

The Company’s community-oriented activities include significant economic contributions to the reconstruction efforts in the areas of Emilia Romagna affected by the earthquakes in 2012, in addition to numerous other philanthropic, cultural and scientific initiatives.

The Corrado and Bruno Maria Zaini Foundation, named in honour of the founding family, represents the maximum expression of FATRO’s commitment to human health and well-being. The Foundation finances research into cures for various rare and less-rare diseases, activities and centres for people with disabilities, aid to third world countries and organisations that combat violence against women and children etc.

over the years, the Company has adopted a series of initiatives with the aim of reducing the environmental impact of its activities, in accordance with the ECO HEALTH philosophy, including:

• The adoption and implementation of an Environmental Management System (EMS)

in accordance with the provisions set out in the Standard UNI EN ISO 14001:2015 throughout its manufacturing facilities in Ozzano dell’Emilia (BO) and Maclodio (BS).

• A Cogeneration heat and power plant for environmentally-friendly production

this plant supplies all the heat and power requirements of the Ozzano dell’Emilia facility, providing significant energy savings and reducing drastically the quantity of greenhouse gases, produced when burning fuel to generate electrical energy, which are released into the atmosphere. This system has permitted us to reduce the annual electrical energy requirement of the site by 95%, saving 6.8 tonnes of petroleum per year and decreasing the quantity of CO2 released into the atmosphere annually by 15.7 tonnes..

the solar power installations at our facilities enable us to save 56 tonnes of petroleum per year, equivalent to the emission of 127 tonnes of CO2.

• The “Paper made Trees” project

was set up to ensure that all our informative and packaging materials are produced using 100% recycled paper or paper from certified sources and that the majority of paper used to print documents in our offices is recycled.

from product packaging (Aluminium box, Bag in box) through the decision to install drinking water distributors throughout our facilities in an effort to eliminate the use of plastic bottles, (estimated at approximately 100,000 bottles/year) and providing employees with reusable water bottles, to the choice of “zero environmental impact” advertising material.
FATRO has also decided to favour the use of promotional gadgets produced using recycled or biodegradable materials, thereby reducing waste and pollution.
One example is the pens produced using recycled plastic bottles or the by-products of cane sugar manufacturing processes.

including through the use of informative material and signs on display throughout the premises, reminding personnel of the need to save electrical energy.
For FATRO it is fundamentally important that its employees are well-informed, and committed to the objectives of “ONE HEALTH ECO HEALTH”. 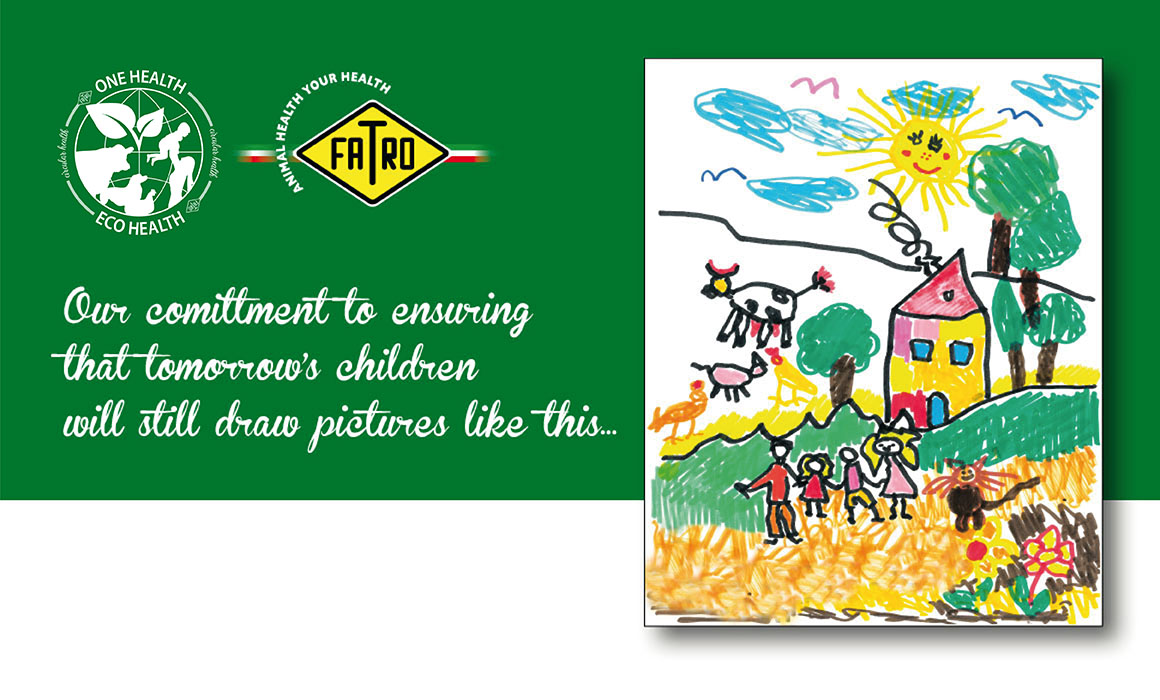